For many years I have wanted to catch sheefish, yet the rivers they inhabit always seemed light years away. There were so many unknowns about sheefish, or Inconnu, as they are called by native Alaskans, and I didn’t know where to begin. However, with the Internet – the “‘Information Highway” – these problems are now easily solved and before long a pile of information started to fill in the blanks.

Where and When to look for Sheefish

Sheefish migrate up many rivers in northern Alaska, and it is interesting that the northern-most range of the rainbow, is the southern-most range of the sheefish. This translates to basically the northern half of Alaska, with the largest of the species inhabiting rivers farther north. Most of the larger sheefish are searun, migrating up many large Alaskan rivers in the spring to feed heavily on salmon smolt and other small baitfish. Migration periods and feeding sprees can vary, but by mid- summer, sheefish move up into the smaller tributaries to spawn. The key is to determine where they might be during this feeding period, before they move out of the larger rivers to spawn. Typically this period is from June to mid-July when they intercept salmon smolt making their way to the sea. I am told, however, sheefish, in some rivers, can be caught all summer.

The Trip – getting there

Due to work constraints I could not travel until after the 4th of July, but the timing worked perfectly for our group. Our destination was Sleetmute, on the Kuskakwim River, which is near the confluence of the Holitna River. This base would give us shots at sheefish plus there are good populations of medium sized pike, one of my favorite fly rod species. My Alaskan buddies Mike Scott, and Tom Ross were as excited as I was to get started on this do-it-yourself (DIY) adventure!

We flew from Anchorage to Aniak and then took the mail plane to Sleetmute where we stayed at Henry Hill’s boarding house – the beginning our DIY fishing adventure. Henry provided the boat and motor for our daily runs up the Kuskakwim and Holitna rivers, as well as great food, which included delicious, white, flakey, sheefish and pike.

Sheefish action – what we’d been looking for 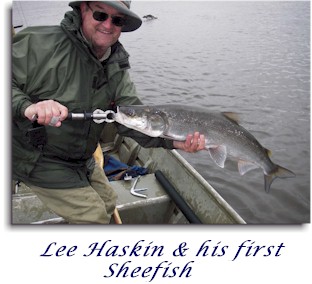 Henry was very helpful in marking our map and pointing out several known sheefish holes that might be holding fish when we were there. As we motored up the Holitna, the second day, we were wondering just how we would be able to locate these “holes”; however, as we rounded a long bend in the river, I caught a glimpse of flash some 300 yards upriver, and as we approached, we could see numerous fish jumping and chasing bait. It looked similar to stripers boiling the surface. It didn’t take long to position the boat for a drift through the fury. I had rigged my rods the night before and had them broken down in Rigged and Ready Rod Bags which put me ahead of my partners – I had my fly in the air while they were still stringing up their rods! On my second cast-WHAM!- my first sheefish was on and my long wait for this moment was over.

We finally anchored in the “hole” and caught fish for several hours, with most of them ranging between 5- and 10-pounds. Our first sheefish experience was a total success and I was particularly pleased that my new smolt pattern, called B-Trout, matched the smolt perfectly and produced repeated, aggressive strikes. Later in the trip this same pattern, tied on a smaller hook, proved a great pattern for big rainbows!

The primary sheefish hole, indicated by Henry, was some 25 miles up the Holitna River, so we decided to make this our destination, the 3rd day out. Although a big river, navigating the Holitna took close attention to the bars and sunken trees; and between the moose, black bear and golden eagles, we had much to see on our way upriver. As we approached the high-banked bend in the river that Henry had marked on the map, we instantly saw the fish. Bigger fish could be seen jumping and blasting the helpless smolt. Evidently, these sheefish holes are formed by a shoal, and/or deep hole in the river, which creates a boil. This is a natural collection area for smolt and other small baitfish, and the sheefish are concentrated in these well-defined areas. As a result, we were able to position the boat, place the anchor, and drop down into position, enabling two of us to cast in several directions, while the 3rd guy rested and handled the fish. 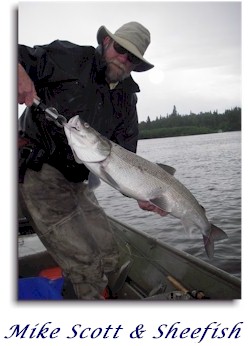 The use of a Boga was especially helpful for handling the sheefish, without touching them, although we did lift a few for photos. Only a few casts were needed to start hooking fish, which we did for the next 2 hours! The difference between our earlier encounter and this pod, was size. These fish were much larger, on average, with many 15 lb. fish brought to the boat. Some fish even pushed 20 lbs. Although most of our baitfish patterns worked well, we noticed that the J hook patterns were being taken deep in the throat with a few causing damage. I switched to a jig hook and successfully used several of my standard, flashy striper flies, tied on 2/0 EC 413 hooks. Sheefish inhale the subsurface fly, similar to tarpon, so the jig hook proved to be a better choice. However, to our delight, most of the fish were keyed on top, so top water bugs were very effective and the sheefish would slash at them, similar to a striper. We had no problem with deep-hooked fish, using top water bugs tied on J hooks. The top water strikes were more of a slashing strike, rather than the inhaled grab of the subsurface strike.

Unfortunately, the fight of a sheefish is not great, although the bigger fish put on a dogged fight down deep. These fish will give you a good jump to two, and it seemed we missed strikes, and dropped a good number of fish due to their small and tender mouth. 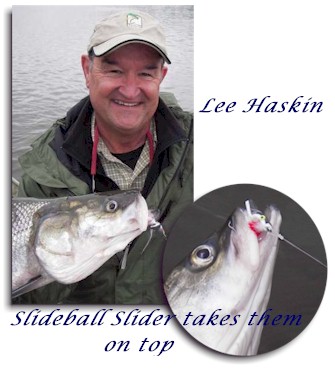 When I tried one of my new Slideball sliders, in gray and white, I started to hook up on the larger sheefish, and my buddies were quick to grab my box and tie on a 2/0 Slideball, as well. There experience was the same-larger fish with the Slideball slider. We lost track of the teeners caught that day! As we pulled the anchor and fired up the motor, sheefish were still jumping, yet with big smiles all around we headed upriver to yet another pike slough to complete our day.

On our way downriver, after our last day, Mike wanted to try for sheefish, even though no fish were obviously feeding. He switched to a sinking line (T-14 head) and was into fish after a couple of casts.

Oh, I almost forgot to mention the solitude. In four days we didn’t encounter even one other fisherman! With so many people chasing salmon, this fishery is completely open to those willing to make the effort. This was probably the easiest and most productive DIY trips I’ve ever made. At $7.50 a gallon, I was pleased that Henry’s boats were equipped with 4-stroke motors too.

Pike were available too 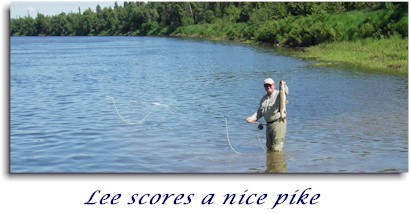 Before we made the trip, we studied the river, using Google Earth, which revealed a number of interesting, hidden sloughs that looked promising, and after consulting Henry, determined these sloughs were worth exploration. We area where we found good pike fishing was off the muddy Kuskakwim. We motored upriver some 10 miles to find our first “secret slough”. As we tilted the motor, and slowly made our way up the small, root beer-colored stream, we were pumped with excitement, and after a short run, the small stream opened into an impressive lake/slough that provided non-stop action on pike to about 10 lbs. The shore lunch of chunked pike tasted especially sweet as a light rain and lightening storm closed in. Mike wanted to try a new recipe, which 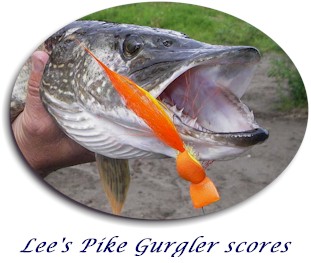 included dill pickle juice, and an egg, dusted with instant potato flakes. It was incredible! Fortunately, the nearby fire, started by a lightening strike, was far enough away to be a problem.

Reels: Any reel sized to fit an 8 wt. Rod. Backing is not an issue.

Lines: Floating-Rio Clouser Line-10 wt. (we made no effort to change our pike lines to other floating lines); Sinking-Rio Density Compensated-275 gr.

Raingear: Waist-high wader and thigh length raincoat made for a dry trip and easy wading, when necessary. Felt sole boots were nice in the boat.

Hook/fish Handling: Boga, for both pike and sheefish, kept fish out of the boat and not touched for release. Long hook disgorger and pike spreader.

Camera: Pentax Optio WP. No need to worry about rainy conditions with this waterproof camera!