Scott Lake Lodge – Tips to Improve Your Score – On The Fly 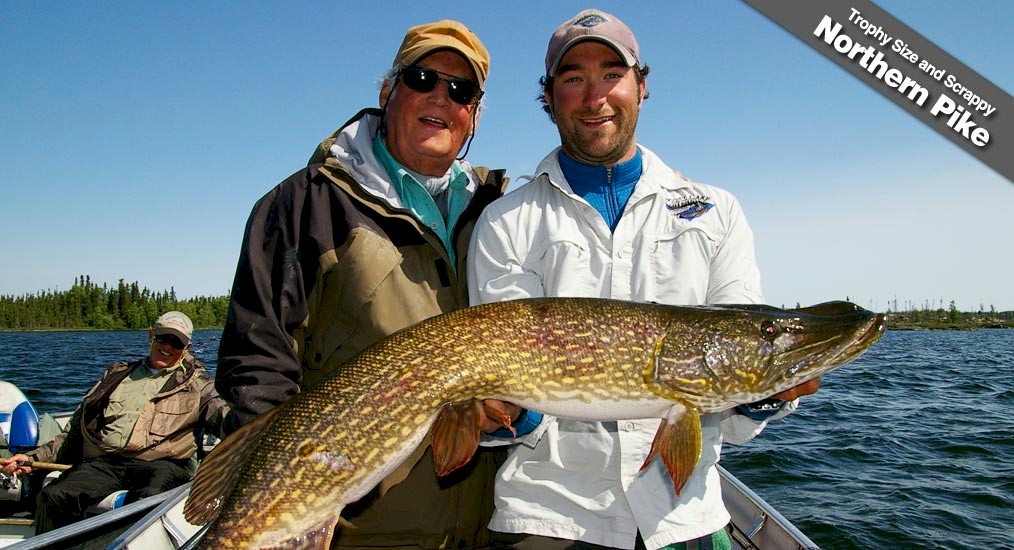 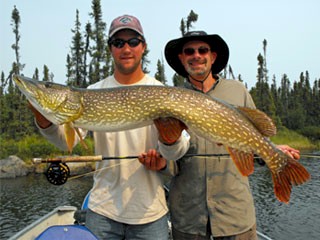 On the Fly: Improving Your Score
by Dan Blanton

I was first introduced to Scott Lake’s incredible fly fishing for pike and lake trout in 1995, by my long time friend and mentor, Lefty Kreh. I wanted to share a fun, fast-action trip with Lefty and had left the destination up to him. He chose Scott Lake because it was one of his personal favorites. During the course of the four years I’ve been traveling to Scott Lake since, leading groups and conducting fly fishing clinics, this wondrous place has also become my personal favorite fly fishing Mecca.

I’ll always be grateful to Lefty for inducting me into the fun-filled, hilarious world of fly fishing for the ‘barracuda of fresh’, the northern pike. While I haven’t fished other highly touted northern pike waters, during my short tenure at Scott Lake, I’ve learned a great deal about what it takes to be consistently successful while fly casting for these fly-trashing denizens of the north woods. The following, while not all inclusive, nor etched in granite, should provide a solid guide to success when on your first fly fishing expedition to the wondrous world of Scott Lake.

Scott Lake is 40 kilometers by 40 kilometers, a huge chunk of pike and lake trout real estate. There are lots of immense lakes in Saskatchewan but few can boast of the topography of Scott. Within its perimeters, there are hundreds of shallow bays, large and small plus equal numbers of islands, rocky reefs and shoals. There is always a good place to fly fish, despite the worst weather hand dealt you. Many of the larger lakes in the far north turn into the North Sea when the fly fisher’s Nemesis screeches out of the northeast, keeping you at the dock. Over four week-long trips, I’ve never lost a day of fly fishing at Scott due to inclement weather.

At Scott there are rock bays; mud-bottom bays; combinations of each; and bays choked with lily pads and shorelines green with snake grass and other vegetation. You’ve got it all! About sixty percent of the fly-rod action is sight fishing – seeing your target first and then casting to it. The rest of the action requires blind casting to likely looking habitat and holding tightly to your grip for the surprise attack. Of course sight fishing is the highlight, but those un-foretold grabs are nothing to scoff at, either. It’s all a hoot! The grab is everything!

Tackling Up For Scott Lake Pike

Pike are hilarious fun on fly gear but not because they’ll run you into your backing, requiring reels designed for bluewater combat. They won’t and you don’t! You do need a good fly rod ranging from a 7-weight to a 9- or 10-weight, depending upon the size of the flies you plan to toss. Remember it’s the weight of the fly line that carries the fly along for the ride and the heavier the fly the more line weight you’ll need. I like a 9-weight for all-round diversity, over-lined with a 10-weight. Your average cast won’t be long, under 60 feet.

quality, with a good drag and at least 150 yards of backing, although it would be rare if a huge pike ever pulled out more than 60 or 70 yards of it. Fly lines: a weight forward (WF) floater will get the job done about 90 percent of the time in shallow water. If the fish are down a bit a WF sink-tip will do, but a WF intermediate sinking density would be even better. If the fish are deeper, a type II to IV, WF sinker, a shooting head or a Teeny 300 (that’s a brand name) will do it.

I like to keep them simple. I use a two-stage tapered leader consisting of about 4 feet of 30-pound for a butt section and about 3 feet of 20-pound for a class tippet, joined together using a simple Surgeon’s knot. Since pike have dentures like a brush chipper, you’ll definitely need a wire bite leader. Here’s what works for me: First, I tie a small, high quality black barrel swivel to the end of my class tippet using a Palomar knot or Trilene knot. To the open end of the swivel I Figure-8 knot on a 10- to 12-inch length of black, 30-pound-test, Berkley, coated braided wire. This longer length allows several fly changes or leader-curl removal before having to replace the entire bite leader; and, it still casts amazingly well. The fly is joined to the biteleader using a Figure-8 knot, or you can attach a small Berkley X-lock snap swivel using the same knot and simply clip into your fly. This works great with flies that are intended to dip and dive, like my Whistler patterns.

There’s a gaggle of great pike flies and if you have your favorites, bring them. Here’s what works great for me: Blanton’s Flashtail Whistlers with double wire snag guards, size 2/0 to 3/0 in yellow/red; yellow/orange; red/white; white/chartreuse and all white; Lefty’s Deceivers, same sizes in the same colors; Blanton’s Sar-Mul-Macs in the sardine color; Dalberg Divers – regular size, not the mega divers; Blanton’s yellow/orange, hair-head wakers with double wire guards in 3/0 and 4/0; and finally a selection of rabbit strip flies and leeches, mostly in all black, with a few having colors of red, orange, or chartreuse.

Of all the flies listed above, my favorites are the Flashtail Whistler patterns, particularly yellow and red. This fly is a big pike killer. I also prefer bright patterns over dark flies (although black is often the killer color), because I can see the fraud disappear in sometimes tannin-stained water when an invisible pike eats it and I knowingly set the hook. Just another edge…

You’ll encounter several situations which call for the fly to be retrieved in varied ways. The most common pull is to just use a mix of short and long, slow and fast pulls – darts, stops and starts, when blind casting to edges of structure, from rock or grass banks to open water over mud or rock bottoms. If a fish follows but won’t hit, just twitch the fly but keep it moving. Tease it! If you stop the fly with a follower, it’ll lose interest. When casting into pads or dense shoreline cover just use a steady, medium to slow retrieve and try to get the fly to push water and move cover. Watch for pike waking out of the weeds to nail your fly or waker.

Lilly pads: here’s where a waker or diver with #7 double wire snag guards shine. Cast into the pads and just retrieve the fly steadily, pushing a ton of water, forming a V-wake. The wakes of pike moving for the fly from as far away as 30 or 40 feet will look like spokes on a wheel, your fly the hub. The grab will almost stop your heart! This is as good as it gets! This same tact will provoke strikes from big pike in open water as well. I love fishing wakers…

Big pike often lay with their chins on the mud bottom, just soaking up sun. Cast a few feet beyond and just work the fly back past their snout at a medium clip. If they won’t show interest, which is often the case, just drop the fly (a FT Whistler is supreme here; ditto for a black leech) right to the bottom just in front of it’s nose. Twitch, stop, twitch, stop. Puff up a little mud and you’ll see the critter’s mouth and pecs begin to twitch like the eye of a psychopath just before it plows into the fly like a locomotive into a stalled car. What a rush!

Your Guides Approach (Don’t Let It Throw You)

One of the standard approaches to fly fishing for Scott Lake pike or when using any other type of tackle, for that matter, is to motor into a pike bay, usually backing in through a narrow channel, and then continuing to motor along the banks at a cast’s length without stopping. The angler fires casts to the rocks, grass, pads or weed edges, one after the other and often the guide doesn’t stop long, if at all, as he works back into the bay, covering all the water, searching for a trophy.

Many anglers find this constant motoring and moving a major distraction, especially if the skinny water gets roiled up, or if they get a follow and the guide doesn’t stop for re-casts to the interested critter. Don’t let this tact throw you. Just keep casting, and don’t fret if the moving boat pulls a belly into your line, keep fishing out the cast and fire again. If a pike wants your moniker, it’ll nail it. Also fan cast, working both sides of the boat and out into the middle of the bays. Lots of trophy pike will be found laying still, chins on the warm mud bottoms. They may even be asleep. It’s amazing how a dead-action bay can quickly come to life once the guide has motored around in it for a while, stirring things up. Guides rarely shut the motor off, but the 40 hp Hondas are so quiet you soon forget about their drumming, especially when you realize the pike couldn’t care less about the noise.

Not All Pike Are In Shallow Bays

Be prepared by having fly lines that will let you work the water column from right on top to depths of 10 feet or more (Scott has for complimentary use, fly outfits rigged with floating, sinking-tip or full sinking lines).

There are many good northern lodges that boast of superb pike fly fishing opportunities. Unfortunately, most still allow anglers to hook and take home fish, making catching a trophy pike of 18 pounds or more difficult if not rare. Scott Lake Lodge has been managed as a “catch and release, barbless hook” fishery for years and except for a few small fish taken daily for shore lunches, all are released to grow old and big. It’s not unusual for every angler in camp to land one or more trophy pike during a week’s stay and lots of not quite trophy but incredibly satisfying fish.

This entry was posted in Dan Blanton, Tackle and Techniques Magazine. Bookmark the permalink.