As recently as June, Jerry Meral, who has been given charge by the Brown Administration to lead the Bay Delta Conservation Plan, assured public participants that all processes underway through the BDCP were “open and transparent.” 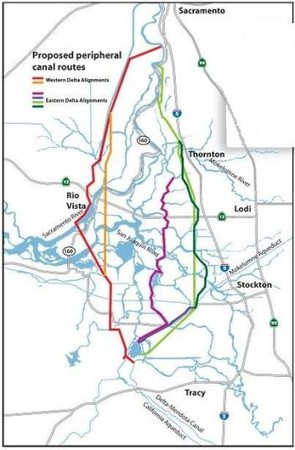 This canal/tunnel, a key component of the Bay Delta Conservation Plan (BDCP), will divert Sacramento River water away from the Sacramento-San Joaquin Delta to corporate agribusiness interests on the west side of the San Joaquin Valley and southern California water agencies. Schwarzenegger relentlessly campaigned for the canal through the BDCP and Delta Vision processes while he was Governor – and the Brown and Obama administrations have decided to continue Schwarzenegger’s abysmal environmental legacy.

In a public meeting of the BDCP in Sacramento on April 25, John Laird, Secretary of the Natural Resources Agency, committed the agency to making the BDCP more inclusive of all of the stakeholders – and acknowledged the problems with the Schwarzenegger administration’s requirement that participants sign an agreement agreeing to support the construction of the peripheral canal/tunnel.

“I believe that we cannot move forward without listening to the stakeholders around the state,” said Laird. “The status quo on the Delta is unsustainable. There is no one from any groups that believes in the status quo.”

As recently as June, Jerry Meral, who has been given charge by the Brown Administration to lead the Bay Delta Conservation Plan, assured public participants that all processes underway through the BDCP were “open and transparent,” said Barbara Barrigan-Parrilla, Executive Director of Restore the Delta.

However, video from the June 28, 2011 Metropolitan Water District Special Committee on the Bay Delta confirms that water contractors, including Metropolitan Water District’s General Manager Roger Patterson, are already working with Department of Water Resources and Bureau of Reclamation officials to create the finance plan for new conveyance, said Barrigan-Parrilla. The meeting can be heard athttp://mwdh2o.granicus.com/MediaPlayer.php?view_id=12&clip_id=1630, minute 36.

Barrigan-Parrilla points out, “The BDCP website describes work on project financing as not beginning until the fall of 2011 after determinations are made regarding benefits of new water deliveries for State and Federal Water Contractors. However, as we have always suspected, those who want to take additional water away from Northern California and the Delta are crafting a finance plan without California tax payer and/or rate payer input.”

“How much more are urban water users in San Diego and Los Angeles willing to pay for water in order to finance this project?” asks California Delta Chambers Executive Director Bill Wells. “Can Central Valley farmers afford to farm if the price of water triples and quadruples to pay for a canal? And how much of the financial burden will be shifted to tax payers to cover the astronomical costs for environmental mitigation to the Delta?”

Barrigan-Parrilla maintains that Californians are being “hit very hard with cutbacks in education and essential services due to budget cuts.” Therefore, Californians should have a say when it comes to large expenditures like building a canal or tunnel through the Delta – even if they will be asked only to finance a part of the project.

“The conflict between the Brown Administration’s assertion that the Bay Delta Conservation plan is an open and transparent process and the real ongoing practice of dealing with the most important aspects of the BDCP in private is alarming,” she states.

Barrigan-Parrilla asks, “Shouldn’t these types of meetings on financing the Bay Delta Conservation Plan be noticed and open to the public? Why the secrecy if there is nothing to hide?”

As an independent investigative journalist who has uncovered conflicts of interest and violations of numerous laws under Schwarzenegger’s BDCP, Delta Vision and Marine Life Protection Act (MLPA) Initiative fiascos, I concur with Barrigan-Parrilla. If the water contractors indeed have nothing to hide, they should abide by Bagley-Keene Open Meetings Act, the Brown Act and other state laws and open all of their meetings to the public.

The BDCP process to build a peripheral canal is a parallel process to the MLPA Initiative to create a network of controversial “marine protected areas” off the California coast. The promoters of both processes claim that they are “open and transparent” – when they are anything but.

The Brown and Obama administrations are going ahead with Arnold Schwarzenegger’s plans to build a peripheral canal/tunnel by meeting with water exporters in closed-door meetings. Meanwhile, the Brown administration continues to forge ahead with the MLPA Initiative, in spite of the violations of state, federal and international laws that have occurred under the process, funded privately by the shadowy Resources Legacy Fund Foundation.

During his brief public testimony, Osborn exposed the corruption and violations of law by the MLPA’s Blue Ribbon Task Force (http://www.youtube.com/watch?v=I7_04BC1acA).

“After reviewing the documents turned over to us, which previously the BRTF had improperly withheld from the public, we now have evidence, indicating that the public meetings of the BRTF have been an elaborately staged Kabuki performance, choreographed and rehearsed down to the last detail, even to the crafting of motions, in scheduled private meetings held before the so-called public meetings of the BRTF,” said Osborn.  “Clearly, this has not been the most open and transparent process, as it has so often been described.”

In both the case of the BDCP and the MLPA, we are definitely seeing a classic case of, “Meet the new boss – same as the old boss,” as The Who sang many years ago.

As these two controversial processes proceed, the carnage continues at the state and federal water export pumps on the Delta. An alarming 8,538,859 Sacramento splittail and 35,202 Central Valley chinook salmon were “salvaged” in the Delta pumping facilities from January 1, 2011 to June 26, 2011. The number of splittail, a native minnow, salvaged to date is greater than in any previous years since the federal and state governments started keeping records on splittail in 1993.

You can see the BDCP website description of financing at: http://baydeltaconservationplan.com/BDCPPlanningProcess/WorkingGroups/WorkingGroup-Financing.aspx.

This entry was posted in Conservation, News. Bookmark the permalink.