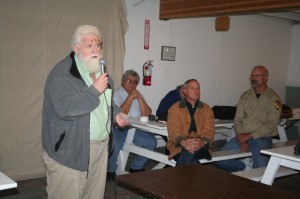 It is rare that a group of anglers find consensus on any issue. It can be said that if you have 10 anglers in a room, you will find 20 opinions.

However, over 350 anglers and members of the public who showed up at the Department of Fish and Game (DFG) “public workshop) in Rio Vista on the night of Tuesday, November 8 made it very clear – they unanimously oppose the new regulations to dramatically increase size and bag limits for striped bass in California.

The proposal would raise the daily bag limit for striped bass from two to six fish, raise the possession limit from two to 12 fish, lower the minimum size from 18 to 12 inches and establish a striper “hot spot” in the South Delta where anglers can possess up to 40 fish.

The proposal is the result of a court settlement of a lawsuit between the Coalition for a Sustainable Delta, an agribusiness “Astroturf” group representing San Joaquin Valley corporate growers. This group is housed in Stewart Resnick’s headquarters for Paramount Farms in Kern County. Resnick is the politically connected Beverly Hills billionaire and largest tree fruit grower in the world who has made tens of millions of dollars annually from buying and reselling water back to the state for a big profit.

Stafford Lehr, chief of the DFG Fisheries Branch, and Marty Gingras, supervising fisheries biologist, gave a power point presentation explaining the proposed regulations, their rationale and the time table for their proposed adoption, including a series of public meetings. “This is part of a settlement that mandates us to create a proposal for striped bass regulations,” said Lehr.

He said that the Fish And Game Commission in 1996 adopted a policy goal of increasing the striper population in the Bay-Delta estuary to 3 million adults. As a result of ESA concerns and the settlement, the agency has to now balance striped bass management with the need to preserve listed species. “The data indicates that the existing striped bass population won’t collapse with these regulations,” he noted.

While the charts displayed in the presentation showed what striped bass ate back in 1967, the DFG disclosed no new data documenting alleged striped bass “predation” of Delta smelt and ESA listed salmon.

“The reason why we don’t find Delta smelt in the guts of the striped bass that we examine is because the smelt are so rare now,” said Gingras. “There are an estimated 600,000 striped bass in the system and miniscule numbers of smelt. Plus the striped bass digest their food fast.”

After the biologists made their presentation, Bob Boucke, owner of Johnson’s Bait and Tackle in Yuba City, was the first one to speak in opposition to the proposal. He urged the DFG, rather than trying to eradicate stripers, to instead focus on the real problem – stopping the massive carnage of Sacramento River chinook salmon, Delta smelt, longfin smelt, green sturgeon and striped bass themselves that takes place in the Delta export pumping facilities.

The stripers have been here 130 years and they have gotten along with the Delta smelt and the salmon all of that time until they started pumping all this water down there,” said Boucke. “Thats when the whole problem started. And yet Fish and Game doesnt want to do anything about the water problem, but they want to ruin our striper fishing. There is nothing wrong with the stripers the way they are.”

“If you do this, you will run every bait and tackle store out of business from Chico to san Francisco,” explained Boucke.

One speaker after another echoed Boucke’s message that the state and federal pumps that have exported record amounts of Delta water to corporate agribusiness and southern California are the key factor behind the declines of salmon, smelt and other fish – not striped bass “predation.

I asked Lehr and Gingras for their reaction to the statement by renowned fishery scientists Dr. Peter B. Moyle and Dr. William A. Bennett, Center for Watershed Sciences, that decreasing the population of striped bass could possibly have a negative impact upon salmon and smelt by changing “basic ecosystem processes.”

According to a letter by Moyle and Bennett to the Fish and Game Commission on August 26, 2010, “Reducing the striped bass population may or may not have a desirable effect (http://calsport.org/news/wp-content/uploads/2011/03/Moyle-and-Bennett-to-CFGC-20100826.pdf). In our opinion, it is most likely to have a negative effect. While the ultimate cause of death of most fish may be predation, the contribution of striped bass to fish declines is not certain. By messing with a dominant predator(if indeed it is), the agencies are inadvertently playing roulette with basic ecosystem processes that can change in unexpected ways in response to reducing striped bass numbers.”

Lehr responded to me, “That’s a good question.” He admitted that the impact of reducing striped bass’s impact was uncertain – and that basic ecosystem principles dictate that something will fill the niche of a fish like the striped bass in the food chain as their numbers decline.

No evidence for stripers causing salmon and Delta smelt decline

Jay Sorenson, founder of the California Striped Bass Association, exposed the absurdity of blaming stripers for salmon and smelt declines when the massive Delta pumps, not striped bass predation, are the key reason for the collapse of listed fish species.

“In 67 years of fishing, I’ve caught and released thousands of stripers and I’ve also kept many stripers to eat,” said Sorenson. “However, I’ve only found one salmon in the stomach cavity of a striper among all of the fish that I’ve cleaned.”

“I hope that we will see the stripers around for future generations so that young people will enjoy what I have experienced on the Delta,” he concluded.

Roger Mammon, Restore the Delta Board Member, said, “If you’re so concerned about the Delta smelt and salmon, why doesn’t the state quit exporting so much water out of the Delta?”

Lehr responded, “There is no way I can answer that question here, but I will bring it to the attention of Charles Bonhan, DFG Director, tomorrow.”

Dawn Gulick, owner of Eddo’s Harbor, echoing the theme of the Occupy Wall Street protests taking place throughout the country, said Stewart Resnick and the big water contractors were waging “class war” against the people of the Delta.

“It’s our Delta. Big Money has big influence over our government and it’s time to take our government back!” she continued as people in the crowd applauded.

The proposal was released at a time when the Obama and Brown administrations, in spite of massive opposition, are fast-tracking the Bay Delta Conservation Plan (BDCP) to build a peripheral canal or tunnel to export more Delta water to corporate agribusiness and southern California. The peripheral canal, a controversial plan to divert water from the Sacramento River in the North Delta rather from the existing pumps in the South Delta, came up during the workshop when Gingras responded to a question why state-of-the art fish screens hadn’t been installed at the Delta pumps, as mandated under the CalFed Record of Decision.

Neither Gingras or Lehr were able to answer this question. However, Gingras, appearing to endorse the concept of the peripheral canal, claimed, “If we take water out of the Sacramento River, we won’t have to continue the trap and truck system of salvaging fish and we won’t have the same problems with the fish screens we have now.”

“I don’t want to deal with the peripheral canal at this workshop,” Lehr noted.

Bill Jennings, executive director/chairman of the California Sportfishing Protection Alliance (CSPA), explained how CSPA, the Northern California Council Federation of Fly Fishers (NCCFFF) and the California Striped Bass Association (CSBA), as well as Delta water agencies, intervened in the lawsuit in support of DFG, but DFG caved and cut a deal. CSPA, NCCFFF, CSBA and the Delta agencies opposed and refused to sign the settlement agreement

“CSPA was looking forward to trial because the evidence in the record did not support the conclusion that striped bass predation caused population level effects on salmon and smelt,” said Jennings. “We felt that the predation that does occur would be pinned on the state and federal project facilities on the Delta.”

Jennings emphasized that if the Fish and Game Commission refuses to adopt the striped bass proposal, the Coalition for a Sustainable Delta must drop the lawsuit.

Sep Hendrickson, host of the California Sportsman Radio Show, urged everybody in the room to deluge the Fish and Game Commission with letters opposing the striped bass proposal. “If you don’t all stand up now against this proposal, the water contractors will roll over us!”

E-Mail to Submit Comments on Proposed Regulations: fgc [at] fgc.ca.gov.

For more information about upcoming Fish and Game Commission meetings, go to: http://www.fgc.ca.gov.

The basic proposed changes are as follows:

Raising the daily bag limit for striped bass from two to six fish.

Raising the possession limit for striped bass from two to 12 fish.

Lowering the minimum size for striped bass from 18 to 12 inches.

Establishing a hot spot for striped bass fishing at Clifton Court Forebay and specified adjacent waterways at which the daily bag limit will be 20 fish, the possession limit will be 40 fish and there will be no size limit. Anglers fishing at the hot spot would be required to fill out a report card and deposit it in an iron ranger or similar receptacle.

Changes to the sport fishing regulations for the Carmel, Pajaro and Salinas Rivers to allow harvest of striped bass when the fishery would otherwise be closed.

DFG is also recommending an adaptive management plan that will help assess how the new regulations influence the fishery.

The proposal and management plan will be presented to the Fish and Game Commission for consideration at its December meeting.

For more information about the DFG’s draft striped bass proposal and upcoming workshops and meeting, go to: http://www.dfg.ca.gov/news.