The NPD Diver was designed with the Sacramento-San Joaquin Delta striped bass in mind. It’s a fly that filled a desire to throw a big topwater pattern to test the theory that big fly equals big fish. But, new designs are not typically drawn up in a vacuum, and the NPD Diver is no exception. The NPD Diver is a credit to the wealth of knowledge offered by Dan Blanton and his Bulletin Board Community.

I’m no stranger to West Coast striped bass. In the late ‘70’s – early ‘80’s, my dad, Roman de Guzman (Aug 1931 – Nov 1991), taught me what a big broken back Rebel lure can do under the cover of darkness in the San Francisco Bay estuaries. But, as far as the Delta was concerned, I was a relative newcomer when I first twisted up the 8-inch long NPD Diver in the Fall 2007.

On its first outing, though, the NPD Diver caught its first fish, a striped bass, from a school suspended in 30-feet of water. But on that day, it’s what it didn’t catch that really made the impression. The fly touched down in the far reaches of the shallow cove where a trail of small bubbles emerged moments earlier. While methodically stripping the fly back, my attention was drawn to the curiously large wake building behind the fly. When the fly reached the boat and before I could say ‘it ain’t the fly causing that wake’, a boil, the size of one a seal makes, scared the daylights out of me and I froze.

It also rained intermittently during its second outing, and the NPD Diver consistently caught fish, including its first black bass. I witnessed another unimaginable explosion on the water, but this time, what caused the the explosion, inhaled the topwater fly, bottomed-out my 30-lb Boga Grip and sent me home shaking in awe and repeating ‘Oh my God’ over and over and over.

Since then, the fly continues to catch good fish from a variety of species and from both fresh and salt water. I’ve seen, the more and more sparse, San Francisco Bay Stripers jump clear out of the water repeatedly in attempts to eat the fly. I’ve seen a double digit fish, stationed on a tulle point, daintily sip down the fly on the pause, and I’ve seen fish race back and forth chasing the fly as it is aggressively stripped subsurface on an Intermediate line.

But while the concept of the head (i.e. the ‘NPD’) came from my noggin and the fly (i.e. the ‘NPD Diver’) came from my vise, the goal of designing a topwater pattern was egged on by Blanton’s Bulletin Board chatter of ‘topwater stripers’; it’s a fly designed for the kinds of fish Costello introduced to me in the winter of ‘99; it’s a fly designed to push water a la Blanton’s Whistler; it’s a fly designed to be measured up against the size of Bisharat’s concoctions; the creative use of foam was akin to Gartside’s Gurglers that Haskin helped popularize; the epoxy-coated, mylar-wrapped head came straight out of Ron Dong’s book of tricks; and somewhere in its core is the influence of Siren and Carver. To me, it’s only right to give credit where due; and so, I’m compelled to share credit with Dan and his Bulletin Board community for any measurable success that the NPD Diver can humbly claim. 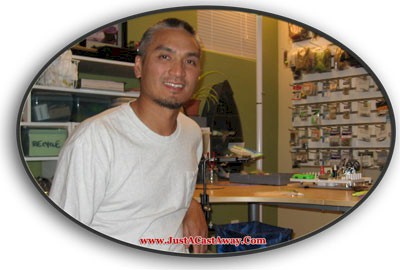