New Books on Atlantic Salmon are Dazzling in Scope 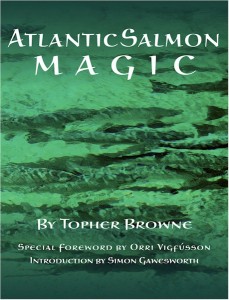 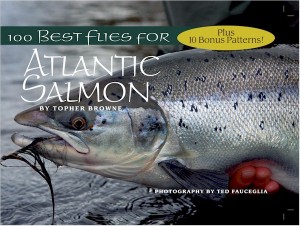 The Seattle-based publisher of high-end sporting books has released two new books about Atlantic salmon flies and fishing that are sure to set a new standard of quality for literature on the sport. 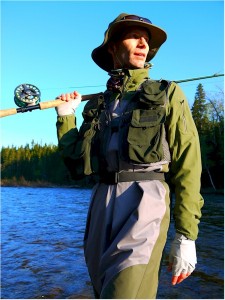 Atlantic Salmon Magic and a smaller companion volume called 100 Best Flies for Atlantic Salmon are the most complete books on the subject in a generation. Both are by Topher Browne of Portland, Maine, a lifelong salmon devotee and acclaimed spey caster. The writing and graphics are extraordinary.

The new titles are part of the award-winning “Masters on the Fly” series by Wild River Press, featuring virtuoso anglers sharing their enthusiasm for, experience with, and hard-won expertise in pursuit of their favorite game fish.

The two salmon books come fresh in the wake of national recognition for A Passion for Tarpon by Andy Mill, which Wild River published one year ago. At BookExpo America in New York in May 2011, Mill’s tarpon book received four awards for excellence, including gold medal Benjamin Franklin Book of the Year awards in two categories—recreation/sports and regional—from the Independent Book Publishers Association, the country’s largest organization of 3,200 independent publishers. Previously, no fishing book had ever achieved this distinction.

Nearly 500 pages with hundreds of stunning color photos and original illustrations, Atlantic Salmon Magic is destined to become a classic. The book is an invaluable guide to everything about Salmo salar, the legendary leaper, celebrated since the time of the Romans. A rich literary and visual feast, this impressive new title from Wild River Press is an absolute must for the avid salmon angler.

When and why does a salmon take an angler’s fly—and what does the salmon actually see? These and other essential questions are answered thoroughly and intelligently in Atlantic Salmon Magic.

This important new bible of fly fishing for salmon builds on the time-tested techniques of Wood, Waddington, Falkus, Wulff, et al., while equipping the 21st-century angler with the latest tactics and flies to effectively cover water anywhere in the world. The book features chapters on where to fish for Atlantic salmon today—with a detailed angling tour of the finest rivers in all the major countries hosting runs of wild salmon: the Canadian provinces of New Brunswick, Newfoundland and Labrador, Nova Scotia and Quebec; plus Scotland, Ireland, Iceland, Norway and Russia.

Highly original overhead and cross-sectional diagrams of rivers show where salmon hold in different types of pools at various water levels—critical to an angler’s understanding of where to fish and where not to fish. The in-depth chapter on reading water alone is worth the price of admission.

Among many topics brilliantly explored are:

□ The latest scientific information on the taking behavior of Atlantic salmon.

□ The advantages and disadvantages of single-handed, switch and double-handed rods.

□ When to use a long-belly line versus a Scandinavian-style or Skagit-style shooting head for spey casting.

□ Clear explanations of the circle spey, the double spey, the snake roll and the single spey.

□ How to set the hook, efficiently play and land a salmon safely.

□ A survey of informed opinions about the critical marine survival of the species.

As a special bonus, each copy of Atlantic Salmon Magic comes with a one-hour DVD worth $30. A Home for Salmon is an exciting exploration of the rugged wild salmon rivers on the north coast of Russia’s Kola Peninsula. This is one of the finest fishing films ever produced with spectacular scenes of huge Atlantic salmon taking flies, fighting to get away, and being released to spawn. An amazing conservation success story and a grand fly-fishing adventure!

An elegant signed and numbered leather-bound and silver-embossed limited edition of 250 copies of Atlantic Salmon Magic is $500. Each copy comes in a matching leather slipcase. With each purchase, Wild River Press will donate $250 to the salmon conservation organization of your choice.