Back in 2008, I was excited to fish this amazing Bahamian island with my good friend, Walt Kleckley. 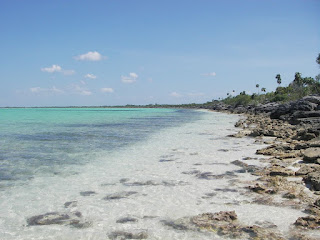 Inagua does not have the long, huge, ocean-side flats, typical of  the Bahamas, but it has some expansive estuary flats that are full of bonefish. 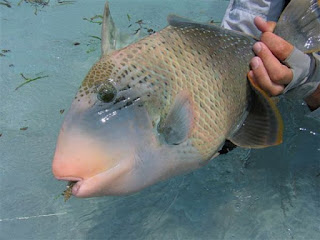 Triggerfish!
Our first day, prior to our guided trip, Walt and I fished the nearby Lighthouse
flats, and discovered one a species high on my “bucket list”: Triggerfish!
These fish were plentiful, this day, and I hooked 5 of these permit-like fish.  They are on the flats at low tide and tail just like permit.  They eat a well placed crab or shrimp fly, and although difficult to hook, due to their hard, toothy mouth, they are a terrific flats game fish, worthy of any fly fisher! 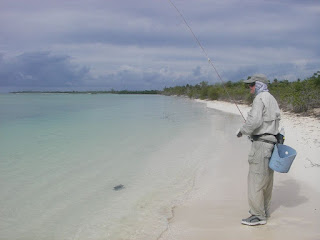 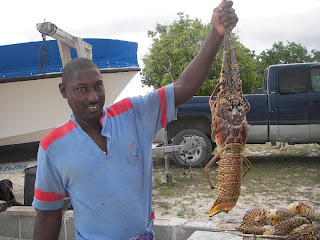 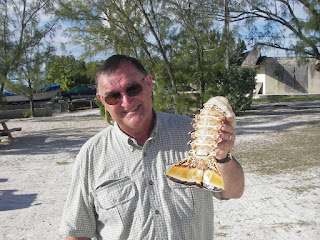 A huge 2 lb. lobster made a great dinner for Walt and I!! 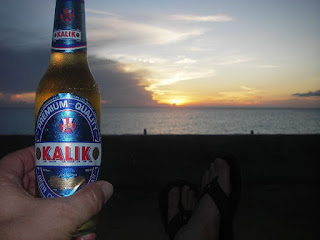 The sunset was especially sweet, after a big lobster dinner!
***
Our first guided day found us motoring to a beach, and hiking through the bush…
(you can forget DIY on this island-Grin!) 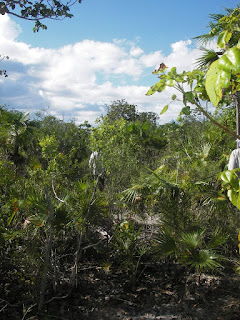 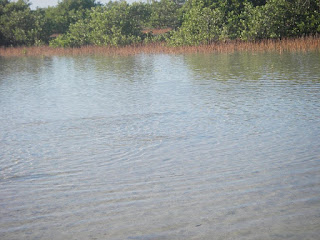 …..to a pristine estuary flat, exposed only during extreme high tide.  The water was only about 6″ deep, and the tails and fins waving to us, were just too perfect!  I had to snap a picture, prior to making the cast.
The bonefish in this picture were 15 to 20 ft. away! 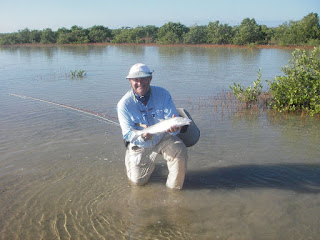 ….and after the cast, my first bonefish of the trip. 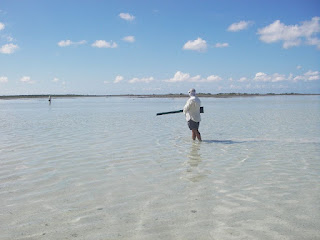 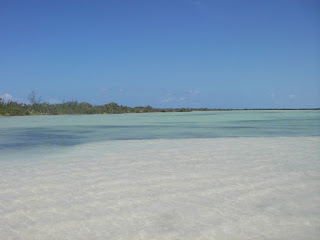 It was fun testing my new Slow Sinking Shrimp pattern.  It was deadly!  Walt and I took at least 20 bonefish, each, this incredible day! 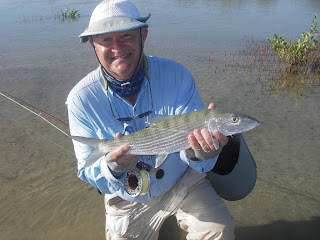 After wading for bonefish, we passed through a deep water cut, and discovered a school of mangrove snappers, swirling around a rock, in the center of the “cut”, as tidal water flowed through.  I grabbed our backup rod, which was set up with wire leader, for barracuda, and it didn’t take long to hook several nice sized mangrove snappers.  Unfortunately, we were quite a distance from the boat, so couldn’t keep one or two for dinner. 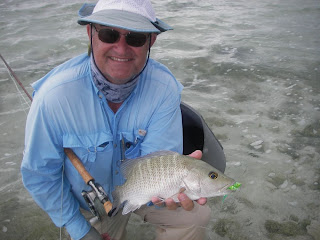 …after playing with the snappers, I moved downstream in search of barracuda, and hooked up with a medium sized cuda that put on quite a show.  This fish was out of the water, with long “greyhound-like” jumps, more than in the water! 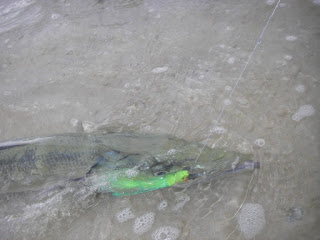 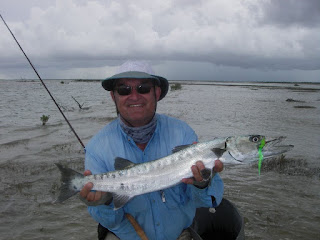 Barracuda!
What a blast on a
Slideball Slider,
cuda fly!

It was finally time in our trip to fish the “lake”.
This is an inland lake that is fed with sea water pumped into the lake, to supply salt water to the huge brine “pans” that provide sea salt for the Morton Salt Company.
The water is moved from pan to pan, and the brine/salinity finally is raised to the point that the water can be completely evaporated, leaving sea salt behind. 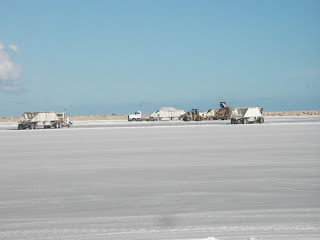 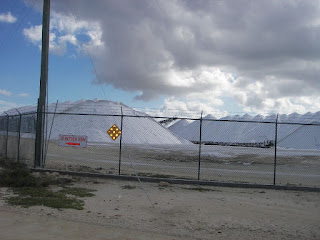 There are many species of salt water species that inhabit the lake, and they are landlocked. 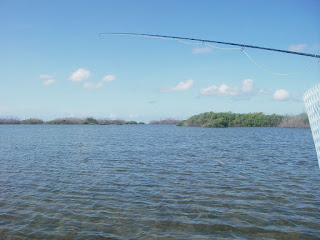 It has become a massive, thriving fishery that extends many miles in every direction.  Our first species was snook, and when I spotted 4 or 5 huge snook moving up to us, I was looking at several snook in excess of 30 lbs.!  They were considerably larger than any snook I had ever seen, yet cast a fly to.
Unfortunately, as often times happens, the smallest fish in the group was the first to attack my fly.  A chunky  15+ lb. snook.  I can still recall watching the much larger (and slower!) snook move away as my fish jumped and burned line from my reel! 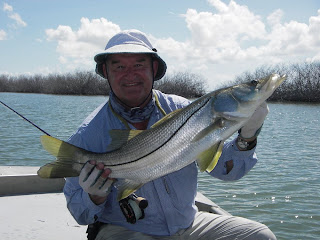 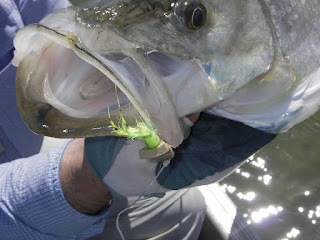 My partner and I lost track of the tarpon we “jumped” one morning, along a cut, from one “pan” to another. 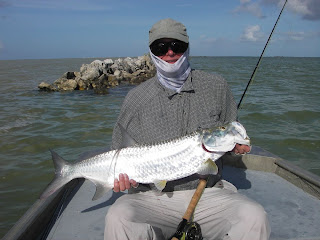 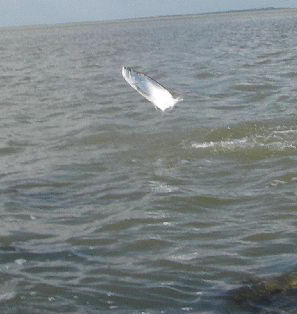 Tarpon in the air!

Later in the week we found tarpon patrolling a channel, near the pump station, and this was perhaps the best tarpon fishing I have ever experienced.  You could see the fish rolling, as they approached, and the water was clear enough to see the tarpon the entire time you were casting!  The takes were close by and totally visible.  We lost track of the fish we jumped in this channel, with a good number brought to hand. 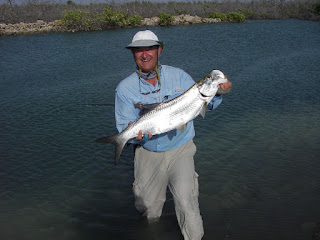 Typical lake tarpon with the canal in the background.

We were aware that hurricane Sandy was making its way toward us, and decided to change our plans and fly home early.  With boarding pass in hand, and our bags on the cart, we received news the news that the Bahamian Air pilots refused to fly, and since they only fly 3 times a week anyway, we were stuck on Inagua for the next 6 days. Although there were power outages, we did have good television, and were able to watch “my SF Giants” win the World Series! 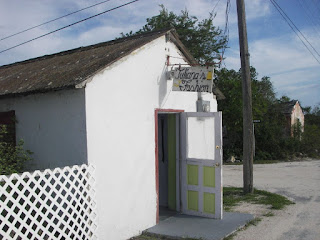 Of course, there is always shopping!

The power of Hurricane Sandy pounded the seawall, in front of our duplex, and eventually destroyed the wall, spewing rocks and debris up into the yard next to our building. 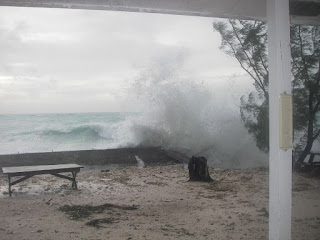 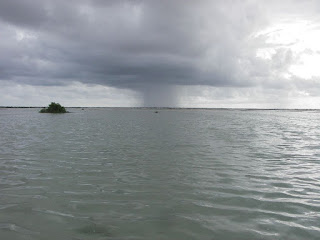 The aftermath of Sandy in our front yard 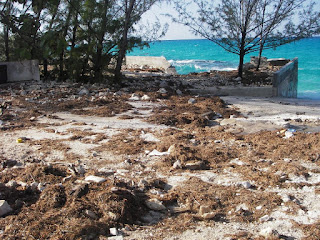 Six days later the weather returned to normal, and we were ready to fly out! 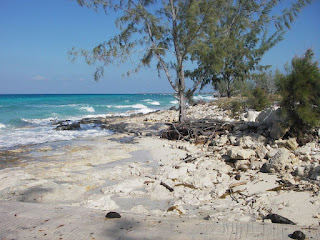 Great Inagua is truly a special place.  There is really nothing like this island in all of the Bahamas.  It is 50 miles long, and only a few short roads to explore the rocky interior and coastline.  There are wild cows, hogs, and donkeys throughout the island, along with vicious mosquitoes!  There are no hotels, restaurants or any “night life”.  It is this fly fisherman’s dream vacation (minus the hurricanes!).  The shear numbers of fish, both in the lake, and on the estuary flats, are staggering!

Many thanks to my partner, Walt Kleckley, for making this trip possible.
I can’t wait to return!
This entry was posted in Fly Fishing Destinations, Lee Haskin, Travel Reports, Trip Reports. Bookmark the permalink.