Originally published on www.outdoors.net on May 3, 2004.

by Dan Blanton
These days it seems that the vast majority of fly anglers are falling all over themselves extolling the virtues of working the top. Bass-buggers scream about the thrill of old bucket mouth humping up the lilly pads as it surges for a perfectly tied deer-hair frog; trouters swoon at the thought of a 20-incher sipping a size 28 whatever, a fly so small I can’t even see one with 8 X 25 binockulars; and I have to admit that a chromer, 15-pound, summer steelhead boiling a vortex large enough to sink a float-tuber, under my size 10 Humpy, thirteen consecutive times before I hooked it, was enough to almost make me pee in my waders once.

A huge number of top-water devotees will even go so far as to pronounce that anything hooked on a surface fly is profoundly worth more in all terms, than one stuck on a sub-surface creation; the deeper the fly in the water column, the less important the fish, and so on. I’ve even fished places in B.C. for steelhead where some folks conspired to pressure everyone to fish only dry – admonishing those who dared reach into a fly box for something that would scratch bottom boulders.

Well, I guess I was just born on the wrong side of the piscatorial tracks, when it comes to fly fishing. I have always preferred fishing wet over dry – particularly when it involved streamer and bucktail fishing – my personal favorite fly type. And, I simply don’t buy the notion that a fish taken on top is better than one that eats a fly fished deep enough to give it the bends. Any fish taken on any fly is a good one in my book! 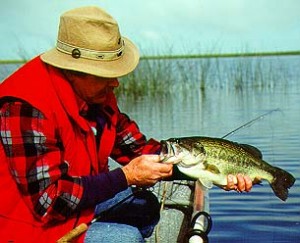 I first started my fly fishing career nailing big bluegills and largemouth bass in California’s Santa Clara Valley, where there were myriad farm ponds and lakes teeming with the critters. I quickly migrated to the coastal streams where winter-run steelhead became my quarry; and the trout country of the high Sierras was part of my home turf, too – not to mention salt water and of course, my beloved San Francisco bay and its wonderful striper fishery. And while I did fish the top a lot, I quickly discovered that the big fish, the really big fish, liked eating other fish, often nearly as big as they were. I guess you can say that I became a big fish addict, a “Head Hunter” as one old fishing buddy once described me. It became obvious to me that streamers, bucktails and wet flies is what it took to get the attention of the heavy weights, particularly if the water had color, or if I was fishing during low light, or before or after major hatches if I was trout fishing.

To this day, I still prefer tossing streamers, bucktails and wets (including nymphs) a vast majority of the time. And when it comes to trout fishing the first thing I tie on, is a big flashy streamer or bucktail (often as large as a 3/0, salt water pattern), particularly during periods of low light. And, Spring and Fall will often find me tantilizing double digit browns and rainbows with 3/0 Sar-Mul-Macs, in places like California’s Twin Lakes.

Most of my baitfish simulating trout and bass flies aren’t that big, though, ranging in size from eight to two, usually tied on two, three or four-X long hooks. One of my absolute favorite patterns is one I developed a number of years ago, an attractor style that proved so deadly on trout and bass, that my wife, Cindy named it the “Fatal Attraction”. It indeed, lives up to its name. 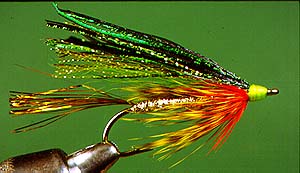 I guess you might say that my Fatal Attraction series is my answer to a hardware angler’s spinner, the likes of a Rooster Tail or a Martin Panther, which are deadly on all manner of finny critters when in the hands of a talented spin-fisher. Trout and bass are drawn from great distances by the tantilizing, flashing, humming blades of these spinners; and the first thing any lure must do before a fish will eat it, is to get the critter’s attention. The second thing the moniker must do, is to dupe the fish into perceiving it as the genuine item – meal time! The Fatal Attraction fills both of these requirements, and then some!

I developed the first Fatal Attraction for a trip to Alaska. I needed a small, sparse but flashy fry fly that might suggest any number of small minnows or salmon fry. Now I’m not going to try to convince you that this bug is a major development in fly design. You’d see through that in a micro second. Indeed the Fatal Attraction is very basic, much like a standard steelhead wet fly, with a little Lefty’s Deceiver thrown in. What set this fly apart from others at the time, was its long tail fashioned entirely from many strands of silver Flashabou – nothing else. This glittery, pulsing tail was my fly’s spinner blade…

I first got the idea from my old friend, Al Perryman. Al and I were fishing for King salmon on Oregon’s, Chetco river. We were thrashing Morrison hole to no avail, when Al tied on a Blue comet, roll-cast it behind my boat and asked what I thought of his new version of an old fly. The first thing that caught my eye was the fly’s tail – nothing but 15 to 20 strands of blue Flashabou dancing enticingly in the current. “I like it! I responded. “Great idea – looks deadly!”

I don’t think Al took a fish on his flash tail comet that day, but I adapted the idea to another old standard salmon fly, the Ted Linder Special, which I re-named the Flash Linder. I slammed the salmon on it a few days later when rains drove the river up making a bigger, brighter fly necessary. I also devastated B.C. steelhead on the same pattern a few seasons later, and I am now never without out a variety of Flash Linders. It made sense to me then, that if a flash tail could so improve old, standard comet style flies, it couldn’t help but do the same for any basic streamer or bucktail.

My first Fatal Attraction was what I now call the “natural”, a simple silver and white, weighted streamer tied on a size 8, Partridge streamer hook. It suggests any of a variety of small minnows. It was deadly in Alaska, and even more so the following season in California’s lake Britton (the second testing), were my son, Rich and I caught and released nearly 300 brown trout ranging in size from 12- to 20-inches in seven days. The water in the lake was somewhat turbid from an algea bloom, and the fly’s flash tail made a huge difference when compared to several other well-know favorites.

I now tie the Fatal Attraction in nine basic colors, one or more of which will garnish a solid strike just about anywhere, under any condition, for a bevy of species ranging from panfish to bass, trout, steelhead and many others. They include: the natural; the dark sunfish; the light sunfish; little rainbow; and brown, black, olive, yellow and chartreuse minnows. Of course this is a style of fly which can be tied in a melange of color combinations to meet just about any need. In fact, I have modified my King Harbor Bucktail, bonito fly, making it a bead-eyed Fatal Attraction which is even more deadly on bonito than my old standard.

Of all the above, my favorites are the natural, the dark and light sunfish (deadly on largemouth bass or trout feeding on sunfish) and the little rainbow. 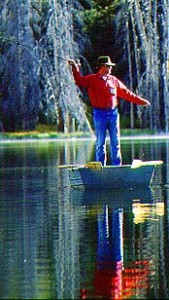 While they can be presented on just about any fly line, depending upon water conditions and the depth of feeding fish, when working Fatal Attractions in lakes, I almost always choose to use an intermediate to fast-sinking, shooting head in order to cover the water more efficiently. And, I suspect the new, clear, mono line by Scientific Anglers would also be an excellent choice, particularly if made into a shooting head. In weedy lakes, like California’s Martis lake or Crowley lake, I enjoy huge success by fishing from my 8-foot pram, anchoring so I can cast parallel to the weed edges and break lines, covering an incredible amount of water from one position. I count the fly down to the level of the fish and then retrieve it with erratic, 6-inch to one to two-foot long pulls, with lots of pauses in between. Strikes are usually violent, wrist-wrenchers.

I suggest you tie up a bunch of Fatal Attractions and give them an honest try. I have no doubt that they’ll markedly increase you streamer fishing success, engendering tremendous confidence while simultaneously establishing a permanent home in your streamer fly box.