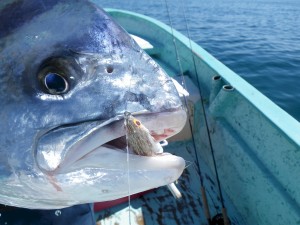 Jonny King is a lifelong fly fisherman and tier from New York City.  Although he has fly fished throughout the United States and in Canada, Central America, South America and the Caribbean, his favorite haunts are the Delaware River System in the Catskills, where he chases wild trout on dry flies, and New York Harbor and Cape Cod, where he stalks stripers, blues and albies.  Jonny routinely goes from tying tiny midges to giant squid flies, and everything in between, and has yet to find a species he doesn’t enjoy chasing with a fly rod.  He writes regular fly tying columns for Fly Fishing in Saltwater, and his fresh and saltwater flies have also been featured in American Angler, Fly Tyer, Fly Fisherman, and a number of international magazines.  When not tying and fishing, Jonny is an intellectual property trial lawyer and a professional jazz pianist, who has toured the world with many different bands. 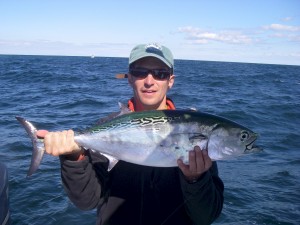 The Kinky Muddler is a modern spin on Muddler-style flies, with a fat head of “spun” Kinky Fiber and a tail of any kind of natural or other mobile material, ranging from saddles and bucktail, to arctic fox or craft fur.  The purpose of the fly is to create some bulk up front, which causes the tail to wiggle like a real baitfish on the retrieve or drift, while also maintaining a realistic, uninterrupted baitfish profile.  It can be tied to resemble a cylindrical mullet, a tiny bay anchovy, or a tall-bodied herring or shad.  The method for creating the “spun” synthetic head with “V-ties” has proven very versatile and has been adapted to squid patterns, Bendbacks, weighted Zonker style flies, and floater/divers.   While originally designed for stripers, the Kinky Muddler has landed everything from rainbow and brown trout, to bluefish and albies, to pike and a number of world-record roosterfish.  The full history and details of the fly can be found in the February 2011 edition of Fly Fisherman, and the pattern is commercially available from Orvis.

This entry was posted in Hot Flies, King's Kinky Muddler. Bookmark the permalink.