A Passion for Tarpon by Andy Mill

A Passion for Tarpon

Yesterday Christmas came early. I heard the mailman drop a bundle of mail on the front porch and he rang the doorbell setting my 2-year-old Italian Spinone into a rant of thunderous barks. Once I got him settled I opened the door to pick up the mail. There was a fairly large express mail box sitting on top of the mail stack. Hmmm, I wondered, must be something Cindy or my Mother-in-law had ordered since I couldn’t recall my purchasing anything on-line lately.

Upon closer inspection though, I recognized the name Tom Pero; and the addressee was me. The box was heavy; my interest piqued.

Was I surprised and pleased when I opened it, for it contained something of great value, benefit and certainly would engender a keen sense of pride of ownership. It was a gift, something totally unexpected – a gift of Andy Mill’s new book “A Passion for Tarpon”. Inside the front cover was a card from Andy with a personal note that was more than just a few obligatory words. His note was warm and endearing and it made me feel as though we had been close friends a long time. I’ve never met the man face-to-face but I’ve certainly heard of him; knew of what he does so well; and have heard nothing but praise of him from my close friends, the likes of Lefty Kreh and other such notables. Man I was like a kid who had gotten exactly what he had prayed for on Christmas day! I was instantly on it like a tarpon on a Toad!

I haven’t read the book entirely yet but I’m well into by now. I had to do just like we all do – quickly thumb through it to check out all the incredible photos most of which were taken by photographer extraordinaire, Pat Ford. They depict flats tarpon fishing like none others I’ve even seen. There were lots of others too, who contributed incredible images, many of them historical, taking us well back into fly-fishing for tarpon’s long history.

The incredible tarpon fly photos were taken by Ted Fauceglia. There were many contributors to help make this wonderful book what it is, too many to mention here, so check the credits.

The forward is written by President George H. W. Bush, a personal friend of Andy’s; and a passionate tarpon angler himself. I was proud for Andy to read the President’s kind words and kudos for him.

The Introduction is by my dear friend Lefty Kreh who we all know. Lefty over the years has spoken to me highly of Andy Mill and he speaks highly of Andy and the book in the Introduction. Lefty knows a good person when he meets one; and he knows a good book when he reads it. Lefty’s word alone would be enough endorsement for me to want to purchase this wonderful work.

Aside from the Foreword, Introduction, Photographer’s Afterword and the author’s Afterword – Credits, Bibliography and index, there are 26 chapters loaded with incredibly good reading.

Andy’s writing style is easy, succinct and sincere with just the right amount of prose, laced with entertaining, supporting anecdotes. In chapter one he talks of his childhood, of his passion for ski racing and of fly fishing; of growing up in Aspen Colorado; how his character was shaped – all of which paints a vivid picture of who Andy was, is and how he got to where he is now. It leaves you with the feeling you’ve know him for all his life. Indeed, I was thankful he included that chapter about himself which let me know the man better.

Andy told me he wanted to present his passion for fly-fishing and tarpon in the best way he could; using the written word; and with photos, charts, and diagrams. He wanted us to know about the early pioneers who helped to develop this sport, to give credit were credit is do, to acknowledge those legends who helped him, who taught him and to shape him into who he is today with regard to fly-fishing for tarpon – probably the best there ever was at the game, probably the best there ever will be.

He wanted to include the history of the sport; the biology of the tarpon – at least as much as we know of it; and Jerry Ault did a marvelous job providing the reader with the biology/life cycle of the tarpon. This in itself is very interesting reading.

Historian, Steve Kantner shines with his contribution to the book with the history of the sport of catching tarpon – going way back. You’ll love reading about it. Good job Steve, I would have expected nothing less from you.

Again, you’ll marvel at the incredible photographs of Pat Ford – shots of tarpon action that’ll make you quiver with excitement and awe. It you are a tarpon angler, if you have the Passion – these photos will put you on the casting platform trying to steel your nerves and steady shaking hands and knees. You know, you’ve been there…

I could go on and on but I think by now you have a good idea how much I like this book – the best I’ve ever seen or read on the subject of fly-fishing for tarpon. I couldn’t recommend it more passionately – it’s worth every cent of the $100 asking price. It’s worth starving the kids to buy a copy. If you are a tarpon angler or want to be one, you have to own this book.

What a year unfolding for Wild River Press.

At BookExpo America 2011 in New York, A Passion for Tarpon by Andy Mill won not one but TWO Benjamin Franklin Awards from the 3,200-member Independent Book Publishers Association, the largest such trade organization in the world. The awards are named for America’s most cherished original publisher/printer. New book titles are grouped by genre, and winners chosen for editorial and graphic excellence by panels of 150 experienced publishers and experts from across the country.

A Passion for Tarpon won the prestigious gold-medal award in the categories of top regional book of 2010 and top sports/recreation book of 2010, a distinction no fly-fishing book had previously achieved. 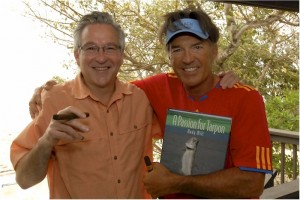 “I was honored to be at the Javits center ceremony to accept the Benjamin Franklin trophies in behalf of Andy and our entire supremely talented team who worked together for years to create this very special book,” said publisher Tom Pero. “Congratulations to all on this well-deserved recognition and honor: graphic designer John Cole; photographers Pat Ford, Ted Fauceglia and Don DeMaria; writer Steve Kantner; tarpon biologist Jerry Ault; illustrator Greg Pearson.”

A Passion for Tarpon also received the bronze medal in the Independent Publisher IPPY Awards for best recreation/sports title. And the New Generation Indie Book Awards named A Passion for Tarpon a finalist in its category of general non-fiction—out of the thousands and thousands of non-fiction works about an infinite range of topics published by independent presses last year.